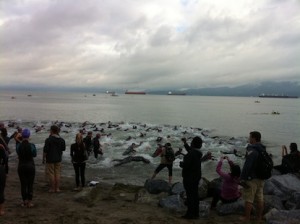 Congratulations to those who participated in the Vancouver Triathlon on July 3rd in Vancouver, BC! This race is part of the Western Subaru Triathlon Series and is known as one of the “Top 10 Urban Triathlons on the Planet!” We watched as over 800 athletes lined up at various times along the waters edge at Spanish Banks waiting for the sound of the horn to prompt them to begin their athletic adventure. Races included half ironman, sprint and relay of both distances. Many of the participants were using this race as an opportunity to “warm up” for Ironman Canada in Penticton this coming August. 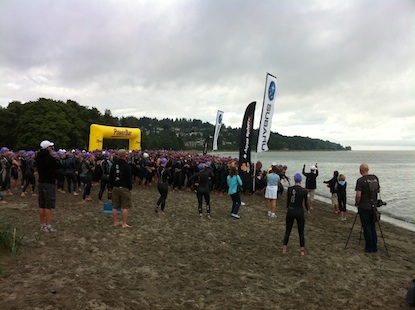 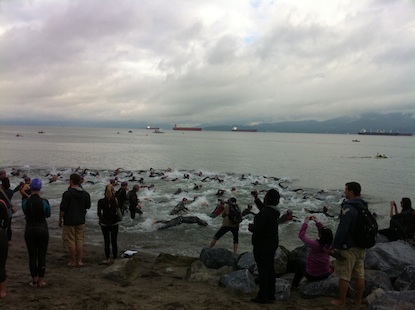 As we were stationed near the finish line, it was quite inspirational to watch each athlete finish the race with intensity and a radiating sense of accomplishment.

It ended up being a gorgeous morning – perfect weather for an early summer race. A few of us from the Optimal Performance Clinic team including myself, Dr. Jaimie Ackerman and Jeanette Dobmeier RMT, as well as Dr. Kenton Sieben and Dr. Jaipaul Parmar (both local chiropractors) were lucky enough to be stationed near the finish line providing complimentary services (chiropractic, active release and massage) for the competing athletes.

It is often that we come across athletes that require a muscle flush after their activity, or who have come across a sprain, strain or some other injury during their race. It may be an old existing injury that has reared it’s ugly head, or a new injury that just decided to pop up at the most opportune time. Whatever it is, we are there to help 🙂 Thank you to the Subaru Triathlon team and participating athletes for the great experience. We hope to provide our services to the Triathlon series in the coming years.

Please email for more information, or to request an appointment: